Further information on the Guttercrest Racing team is available at www.ben-power.co.uk

Mid Wales racing driver Ben Power has moved back up to second in the National Legends Car racing championship, after a successful televised meeting at Donington Park.

Power, aged 25, from Guilsfield, near Welshpool, finished third overall on the first day and first overall on day two.

He won the first race, but was demoted to second because of a time penalty; then finished sixth in race two and seventh in the final, after a major incident sent him across the grass.

The races will be shown on Motors TV on August 26th.

“If the first day was pretty good, the second was very good,” said Power. “We are now back up into second place, and plenty of races still to go, we have a realistic chance of the title.”

The series is currently led by veteran former world champion John Mickel, with James Holman close behind in third place. 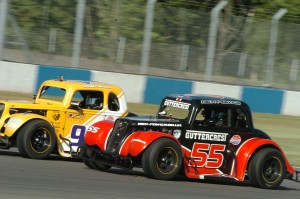 Ben Power in action in the Guttercrest Racing Legends Car (No 55) at Donington Park.

The Legends series moves to Silverstone for its next two-day meeting on August 8-9.

Power made his debut in the Legends Car series in 2009 – finishing 8th overall and 2nd in the rookie table, having switched to the circuits after winning the Junior Rallycross crown in 2006 and Supermodifed Rallycross titles in 2007 and 2008.

The formula originated on the US oval tracks, and the cars have an American look, being 5/8-scale replicas of classic US models. Guttercrest Racing runs a Ford Coupe 1934 replica, with a 1250cc Yamaha motorcycle engine.

With identical cars and the fastest drivers having to start at the back of the grid, there is said to be more overtaking in a single Legends race than in a whole season of Formula 1.

Guttercrest Racing is backed by the family-owned aluminium guttering company Guttercrest, based in Oswestry. The team has further support from award-winning Cardiff-based PR and communications consultancy Weltch Media.

Further information on the Guttercrest Racing team is available at www.ben-power.co.uk