Mickel Makes it a Triple

With a World Series Title and a World Championship Title firmly in his grasp just two weeks earlier, John Mickel arrived at Brands Hatch for the final rounds of the 2015 Legends UK National Championship with the triple title firmly in his sights. He was keen to finish his season in style for his guests, sponsors and fans that had turned up on mass to watch him become victorious. 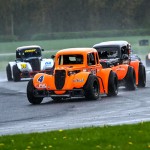 It proved to be a difficult weekend with bad weather, diesel slicks on the racetrack and failing light conditions which all resulted in a cautious driver emerging from John’s usual confident and bullish self. John had to ensure that the #4 K-Seal car finished all three races today to remain a contender for the title that would be decided following the last three races of the season the following day.

The weather meant that the track stayed wet and slippery throughout Saturday.  All three races resulted in a cautious drive for John doing what he could to stay out of trouble, finishing in touch with his Championship rivals in the #6 and #55 cars. He picked up 13th, 9th and 10th place finishes which meant he only lost 150 points from his 650 point lead. But with another 600 points up for grabs on Sunday, John had to remain cautious.

The weather looked slightly brighter on Sunday morning. John was still very focussed on bringing the #4 K-Seal car home in one piece. Statistically, John could still loose the title if he collected less than 100 points over three races together with James Holman in the #6 car winning three out of three races.

John started 14th on the grid with James Holman starting 13th. Knuckle biting stuff! John quietly slotted in behind the #6 car and simply followed him home to the chequered flag, which ensured that John Mickel was now the 2015 Championship winner. 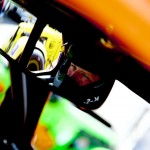 That left two races for John to go and have some fun on the race track!  The British Truck Racing, spectacular as always, resulted in some big smashes leaving a diesel spillage all the way round the complete circuit. This took the event organisers a long time to clean up. After a long wait, the Legends took to the track for race two but John’s race was cut short with his first mechanical failure of the season. The final race was aborted due to failing light conditions after so much time was lost cleaning up the earlier diesel mess. Some may think this is luck but we know how hard John and the team have worked to ensure that they didn’t need to rely on such luck!

This has been a very successful year for the team and there are many people who contribute in so many ways to make it all possible. Mickel Motorsport are very thankful to each and every person who as contributed to the team, from Sponsors to team members and their families and all the fans.